Review : Master – Only for Star heroes 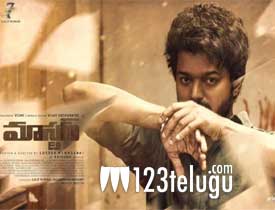 Master is one of the most-awaited biggies that has released this Pongal. Touted to be a full-on action entertainer, this film has superstars Vijay and Vijay Sethupathi in lead roles. Let’s now see how the film is.

JD(Vijay) is a professor who is hated by the college heads. He is a drunkard who does not obey rules. After a big issue, he is sent to a correction center to handle young criminals. On the other hand, the correction center is managed by Bhavani(Vijay Sethupathi) and even cops cannot do anything about it. So, how will JD turn the tables and handle the dreaded Bhavani, and set things right for the youth is the story of Master.

The setup of the film is good and has scope for Vijay to showcase his mass mania and he does that in full flow. Vijay looks handsome, showcases his body, and also dances superbly in all the songs. Hardcore Vijay fans will have a blast seeing their Master’s performance.

But the star of the film is Vijay Sethupathi. Somehow, his role is etched well by the director, and Vijay Sethuthpathi with his local look handles the role superbly. He has a better edge as his screen presence, and the animosity he creates with the scenes is top class. Whenever he comes on the screen, the audience will enjoy it.

Malavika Mohanan is neat in her key role. The climax fight between the two stars is just amazing and has whistle lowing moments for the fans. The Kabaddi scenes of Vijay, interval bang phone conversation, and Vijay’s intro are quite good in the film. Last but not least Anirudh kills it with his BGM which is superb.

One of the biggest drawbacks of the film is the lack of hero-villain scenes. After seeing the trailers, one gets a feeling that hero and villain confrontation will be in plenty but sadly, that is not the case. Vijay and Vijay Sethupathi only meet in the climax. Their animosity should have been brought in much earlier in the film and more confrontations should have been added.

Also, individually, the scenes are good for both the stars but the story is simple and is not explained well. A correction center overtaken by the villain looks a bit overboard. There is so much lag in the film and at least 20 minutes could have been easily chopped off to make things better.

Lokesh Kanagaraj, who is best at showcasing gritty crime dramas is not at his best. He has done justice to the stars and handled them well but his narration has clearly taken a beating. The film is quite predictable and has nothing new to showcase.

The production values of the film are top-notch. The camerawork is good and the jail setup is showcased in a very realistic manner. Dialogues are good. Dubbing for Vijay Sethupathi does not give the needed effect. The lyrics are neat and so was the production design showcasing the college set up. Music by Anirudh is top class.

Coming to the director Lokesh, he has not brought out the emotions well as Master is quite weak in the emotional aspect. A drunkard Vijay getting a transformation in jail is not showcased well and the emotions shown are weak during this time. Having two biggest stars, Lokesh in a way has wasted a solid opportunity to showcase their confrontations.

On the whole, Master does not live up to the hype and ends as a passable action entertainer. All those who go in wanting to see the star hero and villain tug of war will be disappointed. But fans of Vijay and Vijay Sethupathi will have a blast as the heroes shine in their respective roles. Story-wise, the film is weak, slow, and lengthy. As the festival season is on, the masses will like the film but others should go in with keeping their expectations quite low.