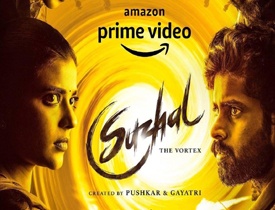 Written, created and also produced by the director duo Pushkar-Gayatri, Suzhal: The Vortex is an eight-episode web series released on Amazon Prime Video. Let’s check how it is

The cement factory where Shanmugam (Parthiban) has been working since its construction goes up in flames. In the meantime, Shanmugam’s younger daughter Nila goes missing on the same day. Inspector Regina (Sriya Reddy) and the Sub-Inspector Chakri (Kathir) begin investigating both cases. Chakri finds out that someone kidnapped Nila and eventually he gets to know the shocking facts behind Nila’s disappearance. What happened to Nila? What did Kathir find out about Nila? Why did the factory go up in flames? To need the answers we need to watch the series.

Pushkar and Gayatri have created Suzhal as an epic series that makes one involved in the story from the beginning. To say, the story is simple but what makes the series an intriguing one is the creative writing and the characters’ design. Every character has its story and creates an impact. The twists and turns in the last few episodes are quite interesting. The way of telling the real story in parallel to the local festival happening in the same village is one of the finest parts of the entire series.

Parthiban performed well as a powerful union leader and also as an emotional father. Whereas, Sriya Reddy looks powerful in the first few episodes and her character changes in the latter episodes. She delivered an outstanding performance. Aishwarya Rajesh and Kathir took everyone into the world of Suzhal with their intense performances from the start to the end. The rest of the characters gave their best. The makers showcased some bold topics like mental health and child abuse in a decent way.

As said above, the story is simple but it has multiple layers. Pushkar and Gayatri neatly unfolded them but what became the hurdle is more love scenes between the teenagers. The story ran so interestingly until then and after the particular episodes, the story gained momentum again and continued till the end.

The runtime is so lengthy and if the makers had planned it as a 6-episode series it could have been more engaging. It is clear that the writers intentionally created some lag.

Directors Bramma and G Anucharan Murugaiyan, who directed 4 episodes each, have succeeded in making the series an intriguing crime thriller. The way they narrated the story without diverting the key point is praiseworthy. Sam CS is the backbone of the series. His background score elevated many scenes and created curiosity to continue watching the series.

Mukeswaran cranked the camera for this series and his work is admirable. He captured the beauty of Munnar, and Sambaloor very well. The way he showcased the Mayana Kollai Festival scares you for sure. Editing by Richard Kevin could have been better and he might have trimmed off some scenes.

On the whole, Suzhal: The Vortex is an intense crime thriller narrated in an interesting manner. Parthiban, Sriya Reddy, Kathir, and Aishwarya Rajesh performed very well. Barring a few scenes, the entire series is worth watching. If you are a fan of crime thrillers and have no issues with runtime, you can stream it.