OTT Review : Plan A Plan B – Telugu film on Netflix 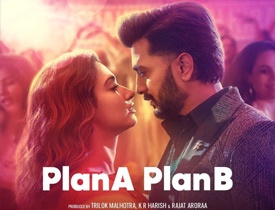 Of late, Netflix has been offering different content for its viewers, and now they have come up with a rom-com titled Plan A Plan B, which is now streaming on the platform. The film stars Tamannaah and Ritesh Deshmukh. So let’s see how it is.

Mr. Kaustubh Chougule (Ritesh Deshmukh) is a family lawyer who is an expert in granting divorce. Nirali Vora (Tamannaah Bhatia) is a psychologist turned matchmaker who newly moved into the shared workspace where Kaustubh’s office is located. Both differ in opinions and professions, and they keep fighting with each other constantly. The rest of the story is about how they fell for each other.

Ritesh Deshmukh performed very well in the given role. His performance as the person who had been affected by his cheating wife is good. The actor conveyed the pain deep inside him well with his expressions. Tammannah Bhatia, as the matchmaker, did justice to her role. The actress was honest in her performance and added value to this wafer-thin plot.

There are a few engrossing scenes in the film. For example, the scene in which Tamannah calls Ritesh after getting drunk has some good dialogues. The climax portions though routine, is decent to watch. The film is just about 1 hour 45 minutes, which became a huge advantage here.

Plan A Plan B is one of the blandest and most predictable movies ever made in recent times. There is no proper emotional connection in the film. Hence we won’t be able to root for the characters. The film is said to be a rom-com, but neither the comedy nor romantic portions fare well. So it ends up being neither.

The writing department needs to be cursed mainly here. Even after having good actors on hand, they failed miserably in coming up with a decent script, if not a great one. Talented actress like Poonam Dhillion is wasted in small role that hardly adds any value to the film. The making feels so rushed.

At a time when OTTs are coming up with out-of-the-world concepts, this rom-com offers nothing new to the viewers. What is even more surprising is that the movie team didn’t even put extra effort in narrating the film in an exciting manner.

The music by Bann Chakraborthy and Yug Bhusal is good. The camera work is fair, and the limited office locations are showcased nicely. The editing is crisp, which helped this film big time. The production values are adequate.

The director Shanshanka Ghosh did a poor job in telling the story, which is coupled with some slothful and apathetic writing. One won’t expect such subpar writing from Rajat Aroraa, who wrote for some famous films like The Dirty Picture and Kick. The writing team should have at least depicted the modern-day relationships in an interesting way to make things better.

On the whole, Plan A Plan B is a forgettable film released this year. Ritesh and Tammannaah try hard to save this life-less rom-com, but the cliched writing and the weak presentation by Shanshanka Ghosh and the team make it a tedious watch. You can comfortably skip the film this weekend.

The post OTT Review : Plan A Plan B – Telugu film on Netflix first appeared on 123telugu.com.